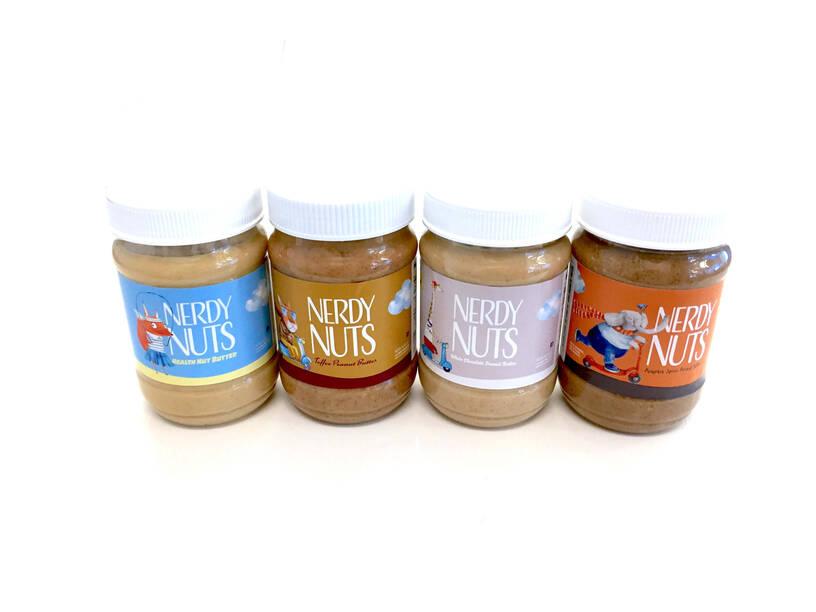 Craig Mount and Erika Peterson started their peanut butter company, Nerdy Nuts, out of their home in the summer of 2019. The idea stemmed from a feeling of uncertainty, when Peterson’s go-to peanut butter plug shut down, that’s when Craig Mount purchased an Olde Tyme PN1 nut grinder for $870 on Ebay. The grinder was eventually forgotten about, until Peterson put it to use in the summer of 2019, and just like that, Nerdy Nuts was born.

The couple started small, with two flavors, honey roasted and white chocolate. They would begin selling their new peanut butter at local farmers markets, and their booth would consistently bring in around $1,000 every Sunday, not bad for what they considered a “low-stress” side hustle.

Although their decision to start small was solely based off the fact that the couple was busy raising and child and working their day jobs, this turned out to be a massive factor that ultimately contributed to their success. Selling at the farmers market meant that they had a lot of face-to-face interactions with their customers, this allowed for them to hand out samples and gather real-time feedback on their product, “It became an excellent testing ground – and a perfect way for us to iterate” said Mount. This real time feedback allowed for Nerdy Nuts to iterate at a rapid pace, something that would’ve been more difficult if they decided to cast a wider net at the start.

After doing some market research, Mount decided that Nerdy Nuts should be branded as a flavorful and fun brand, considering that a majority of direct-to-consumer (D2C) peanut butter brands were more focused on advertising themselves as “healthy” or “keto-friendly”.

By deciding to go the “fun” approach with their branding, Nerdy Nuts opened up the door to many more possibilities when it came to growth tactics and marketing, one example of this would be their US election candidate inspired flavors. In June of 2019, Nerdy Nuts decided to launch a specialty line of flavors based on the favorite foods of each US election candidate. 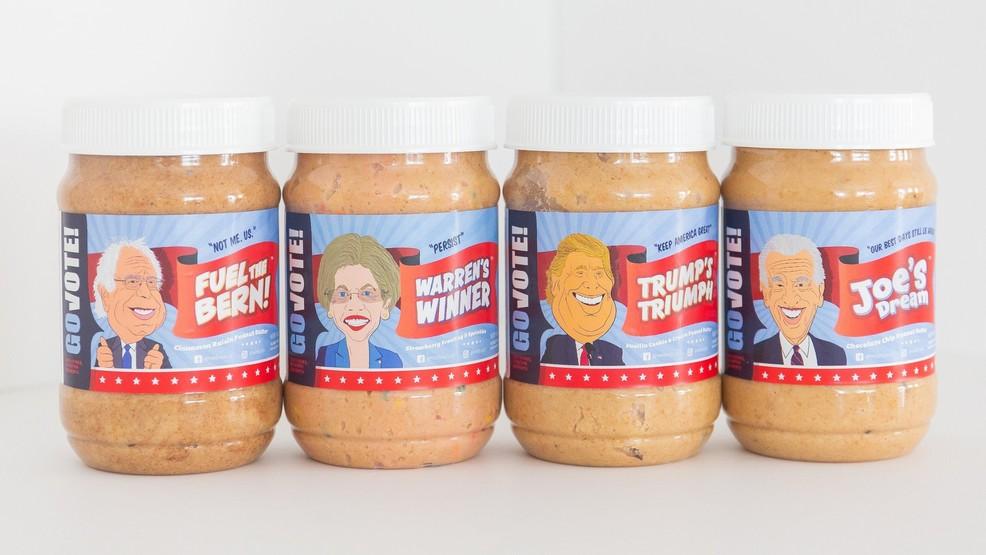 This tactic ultimately landed Nerdy Nuts their first taste of virality, when their story was picked up by Fox Business. Within 48 hours of their national talk show appearance, the company made $20,000 in sales. This early virality showed the small business that there was demand beyond the farmers markets that they were used to, so they transitioned their focus to becoming a D2C brand and ditched the farmers market/retail approach. This decision would not only give them a larger reach, but also be more cost-effective than running a storefront.

Months after their first taste of going viral, Nerdy Nuts was once again a viral sensation, but this time on TikTok. This was nothing compared to the virality they experienced with Fox News, it was even better, “these influencers made the Fox News sales look like a joke” said Mount.

The growing company was experimenting with different marketing approaches when they decided to try out influencers on TikTok. Mount reached out to Ali Grace Morsell and Hailey Peters, both of which had around 500,000 followers on the platform at the time. He offered both influencers free product, “they were just so flabbergasted that anyone would want to send them something for free.” said Mount. Aside from offering them the product for free, Mount also promised the influencers a 10% cut of all sales. 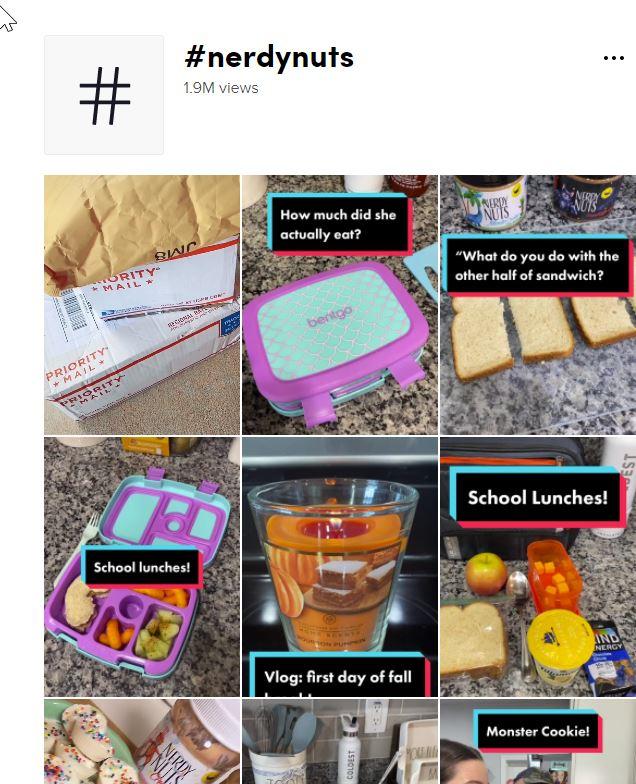 Sales continued to increase until August of 2020, when the company topped over $500,000 in sales – a 20x increase from just a few months prior.

Breaking Down the Strategy

The most obvious, yet crucial, aspect of running an influencer campaign is definitely choosing the right influencers for the job. If you take a look at Hailey and Ali’s TikTok pages, it won’t take much to realize that these are both middle-aged woman that have children and have food-focused pages, both ideal candidates for a brand like Nerdy Nuts.

By being very picky with the influencers you choose to represent your brand, not only are you getting in front of an audience that is actually interested in hearing about your product, but you’re working with an influencer that would be highly likely to enjoy your product as well. Ali and Hailey both have a young family, so they’re most likely already cooking all the time, experimenting with new foods and packing their children’s lunches. By choosing influencers that are highly relevant to your niche, you are ensuring you get someone that is just as passionate about your brand.

2. Having a Good Product

This one is not as obvious as the previous point, but it is still an important piece of the puzzle. We mentioned in our influencer marketing case study on HiSmile Teeth, that the founders ensured they had a product that people actually wanted before sending it out to influencers. The bottom line is, if you have a product that nobody wants, then influencers are not going to want to promote it because at the end of the day they are consumers too.

By starting small and only selling at farmers markets, without knowing it, Nerdy Nuts was perfecting their product as much as possible to get it ready for the mass market. It was apparent that customers were loving the product, so by sending it out to influencers, the company was giving them a product that they most-likely would have enjoyed or even bought without the company asking.

While this point may not be directly correlated to the success of an influencer marketing campaign on TikTok, it most definitely plays an important role. We’ve seen cases of this before, such as with Fashion Nova, where having a product that consumers genuinely loved ended up resulting in a viral feedback loop.

3. Leave the Creativity to the Creators

If you take a look at the content posted by Hailey and Ali as part of their original Nerdy Nuts campaign, you will notice that the content came off as very authentic and genuine, this is because the creativity was left to the creators.

When working with influencers on any platform, it is important to be aware of type of content they post and ensure that your vision aligns with theirs. The last thing you want to do is force an influencer to post a piece of content about your brand that comes off as disingenuous or scripted. Content coming from an influencer is not a TV or radio ad, so it shouldn’t come off as one.

In order to the maximize your ROI, it is important to understand your boundaries when working with influencers.

If you’re reading this thinking to yourself “damn, I should try using TikTok influencers” you’re in luck, because just as Nerdy Nuts discovered for themselves, TikTok influencers are highly underrated and undervalued at the time of writing this article. Influencers are also a topic we discuss in our ultimate guide to TikTok for brands in 2020, we think they're an essential part to anybodies marketing strategy.

Nerdy Nuts is a prime example of how small direct-to-consumer businesses can leverage the power of influencer marketing. If you’re looking to source some influencers for your campaign, and you’re not sure where to start, check out an influencer marketplace like Collabstr.